On Management in Behaviour Modification 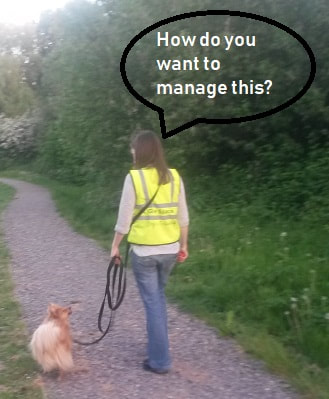 We stop the rehearsing of the problematic behaviour by simply not putting the dog in the environment in which the behaviour gets triggered. This is step one and is hugely important. This might mean walking the dog in quieter places or asking a friend to look after the dog whilst you're at work for a bit.  Determining the trigger/s is what is important to do first and foremost.

Step two and three and four... are not important for this particular post. What's important is that we, as owners, must manage a dogs life in the early stages of behaviour modification: through environmental considerations, routine changes if necessary and activity changes.

The way I work is then about slowly handing the bulk of this management over to the dog during the invaluable behaviour modification process. Generally I don't change a dogs life by using cues. It's rare for me to assess a dog and think "we need to teach this cue this cue and this cue". I wholeheartedly believe that a dog ideally needs to learn to manage their own behaviour as much as is physically possible for them. Their choice of behaviour in any circumstance can be moulded by us, shaped by us, but certainly not micro managed by us long term.

Behaviours that a dog CHOOSES to make are more likely to be repeated. It isn't just about reinforcing desired behaviours. It's about motivating a dog to CHOOSE those behaviours himself over and above all of his other choices - some that will be quite ingrained from weeks/months even years of practice! This can take time but the result is a dog who can handle himself and make decisions for himself with confidence and stability. How long he spends in a situation, how close he gets in a situation, how he engages in a situation, why, where and when... handing the control of these to a dog is to me what behaviour modification is ideally about.

I want to give an example to help further what I'm saying.

Dog X is nervous of other dogs. When he sees another dog passing on the street he starts whining, then barking, then lunging... His behaviour generally escalates until the dog passing goes away.

If we were to keep control of this situation for ourselves we would perhaps train the dog a "watch me" cue. I.e. watch me, stay quiet, just ignore the other dog and lets get on. Does this help how the dog feels underneath this behaviour? Possibly, possibly not. We won't really know because we are just asking them to perform another behaviour that we train into them regardless of how they feel.

If we were aiming to hand the control of this situation over to the dog we would build confidence into the dog, build coping skills into the dog, build the dog up to deal with this situation for themselves at a speed dictated by them. It may be that they never are able to deal with this exact situation. It may be that that close proximity to unknown dogs is just too much for them given their genetics/history/biochemical makeup. What does that mean for the dog? It means that trying to manage this dog ourselves with a cue to act as a "sticky plaster" is putting them in situations that they cannot deal with anyway. There is fallout of doing that. It is unlikely to be what is best for them and you as a connected unit long term.

In behaviour modification/behaviour management we need to let the dogs show US what they can handle, how they want to handle it (when given the time and space to work that out for themselves), and they set the pace for this work. They take the reins bit by bit from us and its a beautiful transition to witness.

Just yesterday I was walking with a friend and her dog who can get quite uncomfortable with dogs who come up close and personal to her.  I had hold of her lead and I suddenly noticed she was pulling and glancing over her shoulder.  I turned around and sure enough there was a dog hot on our heels.  Once upon a time this dog would have turned around and starting barking and lunging in order to get the other dog to go away.  However, through learning to manage herself, she chose in that moment to just walk a bit faster and then turn off to the side to let the dog pass.  It was a brilliant example of a dog who has taken the lead of their own behaviour and manage their own environment (e.g. get more distance from the dog) in order to manage her own behaviour (stay under threshold and keep herself feeling safe).

So yes, management is important in behaviour modification and it is two-fold.  Our management is of paramount importance, until the dog learns how to manage themselves.